Jenny White is a writer and a social anthropologist. Her first novel, The Sultan’s Seal, was published in 2006 (W. W. Norton). It was translated into fourteen languages and is available as a paperback and audiobook. Booklist has named it one of the top ten first novels of 2006 and one of the top ten historical novels of 2006. It was shortlisted for the 2006 Ellis Peters Historical Crime Award. The sequel, The Abyssinian Proof, was published in February 2008 (W. W. Norton) and a third Kamil Pasha novel, The Winter Thief, in 2010. Her latest book, a graphic novel about Turkey's civil war in the 1970s, Turkish Kaleidoscope, will be published on May 4, 2021, by Princeton University Press.

She was born in southern Germany and emigrated with her mother to the United States at the age of seven. They lived in New Rochelle, NY, where she learned English and attended grammar and high school. She studied at Lehman College in the Bronx, part of the City University of New York that had been set up for immigrant children. Working her way through school, she has held a variety of jobs. At various times, she has been a bookkeeper, librarian, file clerk, language teacher, receptionist, patient associate in a clinic, copyeditor, research assistant, teaching assistant, tour coordinator, professor, and now novelist. While at Lehman College, she studied abroad in Germany, where she first met people from Turkey, from which sprang a lifelong interest. After finishing college, she traveled to Turkey and stayed for three years, eventually earning a Master’s degree in psychology from Hacettepe University in Ankara. After working for a couple of years in Montana, she moved to Texas to begin graduate work in anthropology, specializing in Turkey. She received her Ph.D. in anthropology from the University of Texas at Austin.

Jenny White taught social anthropology at Boston University as a tenured professor for many years, but in 2016, she moved back to Europe to take up a professorship at Stockholm University's Institute for Turkish Studies. She has published several scholarly books on contemporary Turkey. Money Makes Us Relatives (1994) is a description of women’s labor in urban Turkey in the 1980s. Islamist Mobilization in Turkey (2002) explains the rise of Islamic politics in Turkey in the 1990s and won the 2003 Douglass Prize for best book in Europeanist anthropology.  Muslim Nationalism and the New Turks (2012) takes a look at the transformations that Turkish Islam and secularism -- and the idea of the nation -- underwent in the previous decade. What was behind Turkey's leap to international prominence, and what should we make of it? Foreign Policy selected it as one of the Best Books of 2012 on the Middle East. Her most recent book (May 2021), Turkish Kaleidoscope, is a new experiment in communicating on the edge between art and science. The book took eight years to complete from first interviews to publication. Jenny White lives in Stockholm, Sweden.

"I learned English as a second language, primarily from books. This nurtured my relationship with language and made books my friends. As long as I can remember, I've wanted to be a writer. From my earliest days of learning English, I carried around a notebook in which I sketched the world in words. However, I also had a bent for science, so opportunity and curiosity took me in that direction, to graduate school and a career as an anthropologist. Over the years, the two desires merged, as my scholarly writing became more and more literary (although not fictional), and my experience in Turkey and knowledge of Turkish culture and history infused my fiction writing.

Now science and fiction have come together in Turkish Kaleidoscope, a graphic novel based on my own experiences in Turkey in the 1970s and on interviews with Turks who lived through that violent period. Working closely together with the amazing artist, Ergün Gündüz, I merged and fictionalized the stories and characters to create a dramatic and heart-wrenching story that, although fiction, is also quite true." 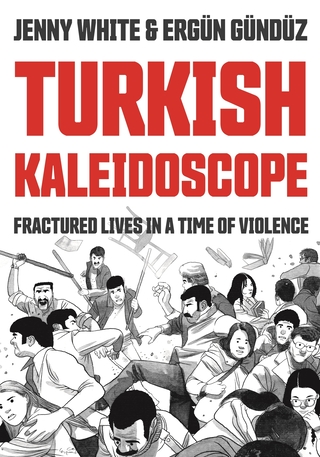 Turkish Kaleidoscope: Fractured Lives in a Time of Violence

A powerful graphic novel that traces Turkey's descent into political violence in the 1970s through the experiences of four students on opposing sides of the conflict.

Muslim Nationalism and the new Turks

What lies behind Turkey’s leap to international prominence under its Muslim government as an economic powerhouse and political player? Can Turkey be a model for the Arab Spring? The author approaches these issues historically and comparatively. She shows that the answers lie not just in the details of elections and political strategies, but in deeper cultural structures that make up the nation.

"Portrait of the Scholar as a Young Novelist"
A humorous look at the adventures of a scholar turned novelist.